Fig. 1. Side view of the converter assembly in a 3D drawing.
In the designing insulation for the parts inside of a converter, coordination among all parts, and even between multiple converters in the modular multilevel converter (MMC) structure, becomes critical. This is especially true during the design of a new generation of power electronics building blocks (PEBB), with the 10 kV metal-oxide-semiconductor field-effect transistor (MOSFET) power module in use. A description of the individual parts inside the converter, with their functions, geometries, dimensions, and spatial coordination will be presented first (Fig.1). The simplified finite element method (FEM) model under different switching statuses is derived, as shown in Fig. 2. Then, the electric field distribution inside the proposed model is analyzed, and geometry-based modification applied in order to reduce stress on critical regions. Simulation results with different geometry coordination are shown. As the results, X and Y are selected to be 6.5 mm and 8.5 mm individually. Y1 is finally selected as 6 mm and the ac metal sheet is 3 mm away from its symmetrical position. This can avoid the issue of too much electric field crowding on the metal-to-air direct interface, and prevent prevent insulation issues, such as partical discharge, corona, sparks, from occurring on these critical regions. Representative coupons will be tested on different excitation levels, and their insulation behavior from a power density standpoint will be demonstrated. Preliminar test results show that, compared to the guidelines developed under linefrequency sinusoidal excitation, the insulation needs to be overdesigned by 3050 percent, dependant on the characterization of the the pulse width modulation excitation, and the the structure of the insulation being utilized. This will be further used to adjust the insulation design guideline in order to avoid aging of the insulation or early failure of a certain structure, with real excitations under consideration. 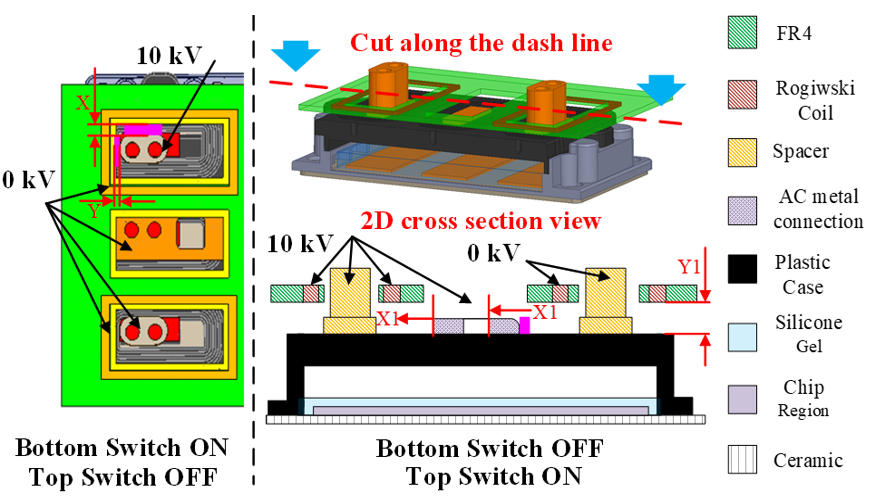