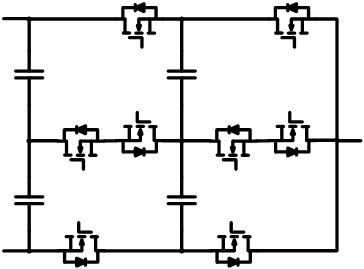 Fig. 1. One phase leg of a 5-level SMC.
High speed motor drives are widely used in industrial applications for advantages such as low weight and volume. One main challenge of the design is generating high quality output voltages at high output frequency and maintaining high efficiency at the same time, as a high switching frequency is typically required by the former, but may lead to more losses. The wide bandgap (WBG) devices, such as SiC MOSFETs, have lower losses and higher switching speed compared to traditional silicon (Si) devices. Therefore, they are especially suitable for high speed motor drives. On the other hand, multilevel converters are popular in applications and can achieve high quality output voltages while maintaining low device switching frequency. Another key challenge is restraining the over-voltage along the motor cable caused by the voltage reflection. The 2-level inverter, 3-level T-type inverter, and 5-level Stacked Multicell Converter (SMC) are compared through simulation with the same modelled motor cable, modelled motor, device switching frequency, and switching speed. As the output voltage level increases, the out-put voltage quality increases, and the maximum voltage at the end of the motor cable reduces. In the 5-level SMC case, the maximum voltage value is only 73 percent higher than the dc bus voltage, eliminating the need of an over-voltage mitigation filter; thus, reducing the total loss and weight of the system. The configuration of one phase leg of a 5-level SMC is shown in Fig. 1. There are two split dc capacitors and two flying capacitors per phase. One phase leg is the equivalent of two 3-level T-type cells, each of which has two pairs of complementary switching devices. Phase-shifted pulse width modulation (PWM) is applied to the two cells to achieve 5-level output. As the three phase legs are identical and the two T-type cells in one phase leg are similar, the PCB design can be focused on the design of one cell. Fig. 2 shows the top view of one cell. The four switching devices, (marked in blue), are placed in the middle of the cell. The two middle devices, which are the ones in the lower half, are placed next to each other because the source terminals of these two devices have to be close and connected together. The top device and bottom device, which are the ones in the upper half, have a heat-sink mounted on the top because they are estimated to have higher losses than middle devices. Each switching device has its own driving circuit, (marked in purple), next to itself. There are also decoupling capacitors, (marked in red), placed around and close to the switching devices. With the aforementioned placements, the main power is transferred from left to right through the switching devices in the middle of the cell, while the auxiliary power and signals are transferred from right to left either at the top or bottom of the cell. There is no overlap between the power circuits and auxiliary circuits. In this study, a three-phase 5-level stacked multicell converter (SMC) using a SiC MOSFET is designed for high speed motor drives. The properties and the advantages of the selected topology are explored. The converter design is finished, including switching device selection, passive component selection, and PCB layout design, as well as validated by experimental results. 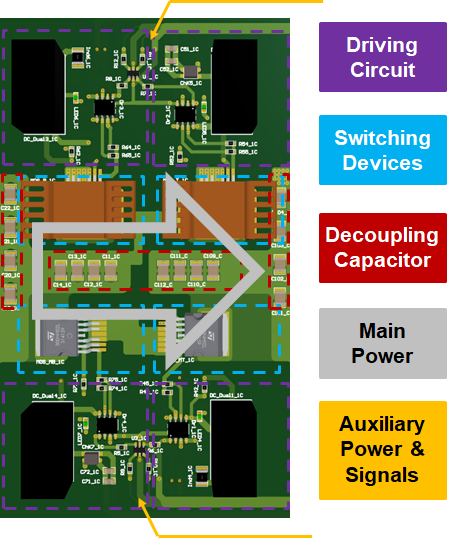