Fig. 1. Paralleled three-phase three-level inverters for PV application.
For photovoltaic (PV) applications, it is possible for three-phase inverters to interface a grid without a transformer. To limit a leakage current through the parasitic capacitance of PV panels, three-level topologies have been widely adopted, as shown in Fig. 1. In cases of power converter based wide bandgap (WBG) devices, switching-loss is reported to be concentrated on the turn-on instants. To increase switching frequency, thus power density, zero-voltage switching (ZVS) schemes are widely investigated. Through ZVS, the switching frequency of the silicon carbide (SiC) three-phase inverter can reach a few hundreds of kHz with an efficiency > 98.5 percent, which leads to a significant increase in power density. In this paper, a detailed comparison in hardware design for a 3-level inverter, operating in continuous conduction-mode (CCM) and triangular conduction-mode (TCM), with three-phase coupled is presented. With an identical full-SiC three-level phase-leg, the switching frequencies for two cases were designed to achieve 99 percent efficiency. To achieve 40 kW output with full-SiC three-level phase-legs, two 20 kW channels are paralleled in the CCM case and three for the TCM case. With designed switching frequency, a design guideline for an LCL filter of a three-phase TCM inverter was presented. Design criteria for each component of the LCL filter, and common-mode choke to block zero-sequence circulating current, were proposed. An analytic solution to calculate core-loss of the inductors with three-phase TCM operation was revealed. An optimization procedure for the LCL filter and CM choke of the TCM inverter was performed, based on the loss model. The final LCL filter design is compared between the CCM inverter and TCM inverter. The benefit on electromagnetic interference (EMI) was also compared in the CCM inverter case. 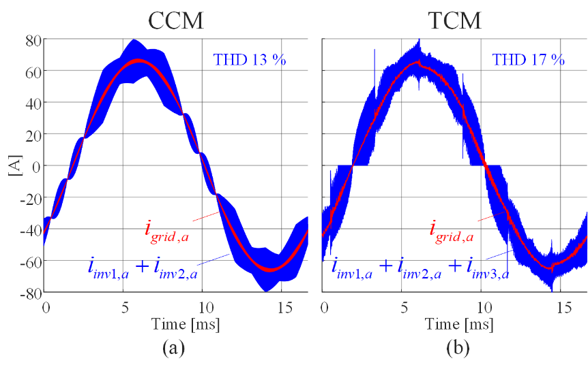 Fig. 2. Simulation waveform: The summation of phase-A current for paralleled inverters and grid-side current. (a) CCM case. (b) TCM case