Fig. 1. One Stage 48/1V Sigma Converter Power architecture
With the ever increasing demands of cloud computing, big data processing, and cryptocurrency mining, by the year 2020 a 10 percent share of the total power consumption will be required by US data centers and telecommunication applications. Replacing 12V bus distribution with a 48V bus distribution system in data centers has been proposed and later adopted by Google®. This architecture promotes a challenge for voltage regulator module (VRM) design being placed near the CPU. The designed VRM must operate at a high efficiency with high power density. In this work, a magnetic integration method is proposed for regulated LLC converters where a printed circuit board (PCB) winding matrix transformer and resonant inductor are integrated using a single core structure with minimum winding requirements. The proposed LLC converter with integrated magnetic structure is utilized in the Sigma converter architecture shown in Fig. 1 for VRM powering the CPU. By realizing a variable gain LLC converter, the Sigma converter is able to effeciently operate with wide input and output voltage ranges to meet the CPU requirements. Comparing with two stage solutions, the power flow in the Sigma converter is shared between two converters with ratio determined with the input voltage across each converter resulting in higher conversion efficiency. The Sigma converter prototype shown in Fig.2 is built to operate with an input voltage range of 40 to 60 V with an output voltage range of 1.3 to 1.85 V. The LLC converter with matrix trans-former structure integrates six transformers and a resonant inductor using a single core structure and PCB winding. The buck converter used for regulating the output voltage is built using GaN devices and a PCB winding inductor. The designed converter provides a maximum output current of 100 A while achieving a maximum efficiency of 95% and power density of 650 W/in3. 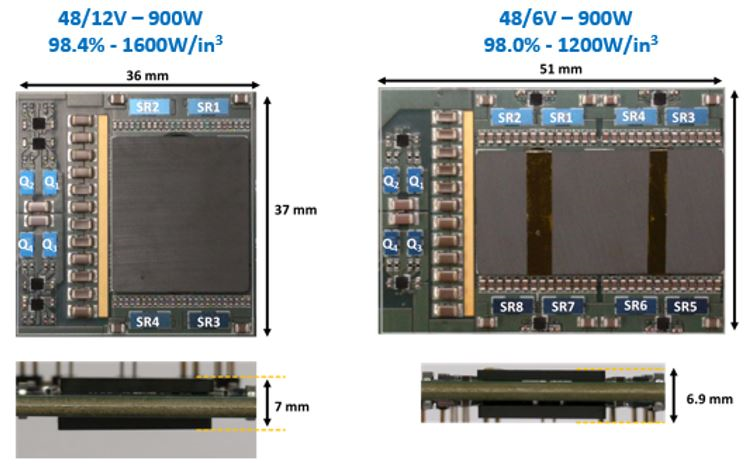