Fig. 1. Short-circuit and overload detection scheme
This paper proposes short-circuit and overload gate-driver protection schemes, based on the parasitic inductance between the Kelvin and power-source terminals of high-current silicon carbide (SiC) MOSFET modules. A comprehensive analysis of the two schemes is presented. It includes the worst-case analysis used to assess their parametric dependence due to manufacturing tolerance and temperature variations. Also included is the in-depth design procedure that can be generally applied to any power module containing a Kelvin source. For verification purposes, a compact 1.2 kV, 400 A half-bridge module, integrating the two protection circuits, is developed. The results demonstrated a response time within tens of nanoseconds, and effectively validated their functionality under fault and overload scenarios. As shown in Fig. 1, two overcurrent-detection-schemes are presented, based on parasitic inductance between the power source and the Kelvin source of SiC MOSFET power modules. A compact 1.2 kV SiC MOSFET gate driver prototype that integrates the two overcurrent detection circuits is developed, to validate their functionalities under conditions of different ambient temperatures. For the short-circuit (SC) protection circuit, this paper provides a comprehensive analysis and detailed in-depth design procedure that is universally applicable to any power module with a Kelvin source. A novel circuit is then developed to realize an overload (OL) protection circuit, based on the same principle. This circuit helps to detect overload current conditions and to prevent the system from exceeding its thermal design limit. The OL detection circuit is designed to trigger with high flexibility, avoiding the generation of false trigger events. The parametric dependence of both SC and OL circuits is thoroughly studied by means of a worst-case analysis. This analysis shows the relatively small impact on the fault detection schemes proposed, when selecting low tolerance components with reduced thermal drift characteristics. Both SC and OL circuits were shown to exhibit a fast response with a delay within tens of nanoseconds and a high current range with no specific limitations. Fig. 2 shows the short-circuit protection procedure. The SC detector demonstrated a wide bandwidth up to hundreds of MHz, featuring low power loss. It is easily integrated on the gate-driver PCB using low-cost basic R, L, C components and comparators. A gate-driver prototype in-tegrating the proposed overcurrent detection scheme, was built and demonstrated, under short-circuit faults and overload conditions. The full qualification of the proposed protection system was conducted in a 100 kW, 400 V three-phase voltage-source inverter, operating under 105 (°)C ambient temperature conditions. 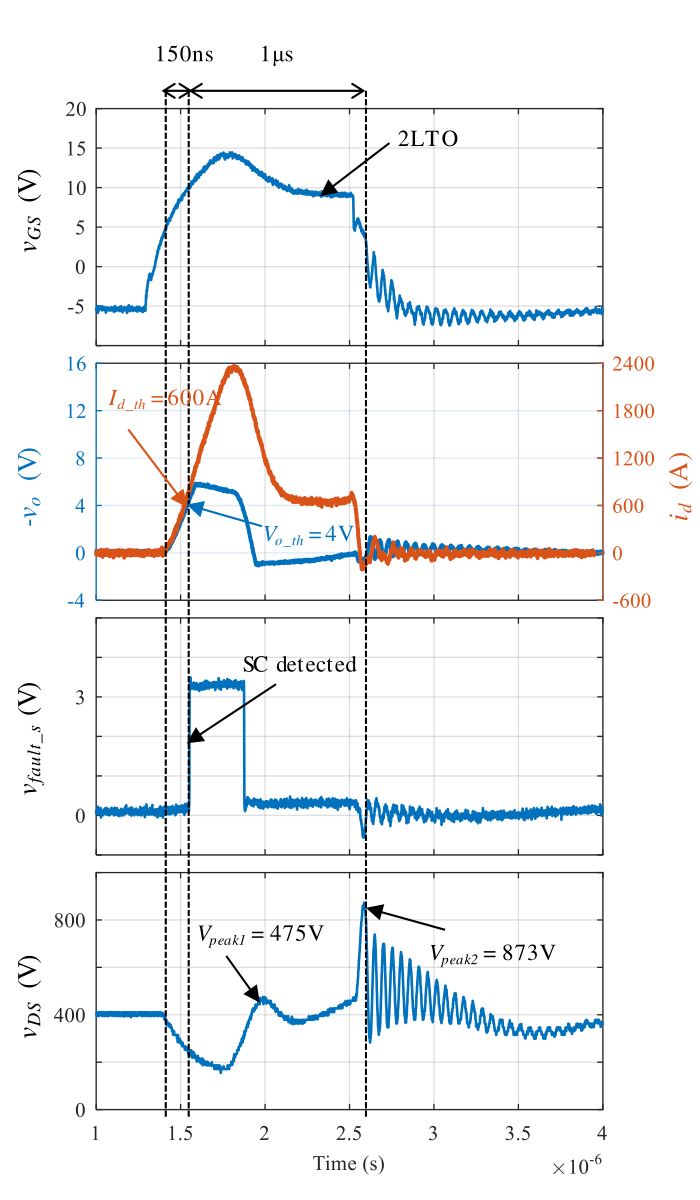