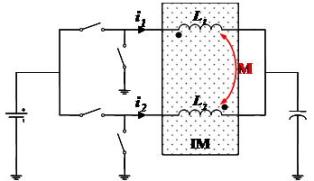 Today, every microprocessor is powered by a multi-phase voltage regulator (VR). Each phase employs a sizeable energy storage inductor to perform the necessary power conversion. For such an application, a larger inductance is preferred for steady-state operation, so that the current ripples can be reduced. On the other hand, a smaller inductor is preferred for fast transients, such as from "sleep-mode" to "wake-up mode" and vice versa. To satisfy this conflicting requirement, a nonlinear inductor, in principle, would be preferred so that during the steady state, the inductance value is large, while during the transient state, the inductance value is small. However, there is no simple way of realizing such a nonlinear inductor. In 1999, CPES proposed a coupled-inductor concept. When the inductors are coupled in a multi-phase buck converter, by virtue of magnetic coupling in the switching network, they behave like nonlinear inductors. The equivalent inductance is large for a steady state and small for a transient. This enables multi-phase VR to deliver power more effectively to the microprocessor that is currently operating at GHz clock frequency. This proposed coupled-inductor concept enables much improved performance, resulting in reduced footprint and cost. The alternative solution to the coupled-inductor approach is to use a large number of decoupling capacitors to supply the transient power needed for the computer, which is cost prohibitive.

CPES proposed the coupled inductor concept early in 1999. This concept from CPES, although intended for public use, has been patented by two companies, Volterra and Advanced Energy (AE), with their specific implementations patented and technology licensed to industries. More recently, CPES has developed another alternative coupling implementation that circumvents their IPs and realizes improved performance at the same time (VTIP 05.040, VTIP 05.063). 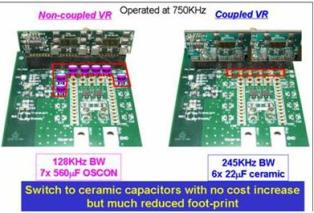 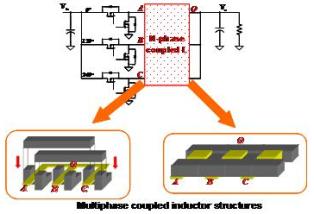 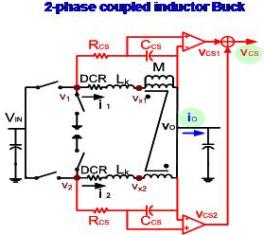