Encouraged by the success of the 48 V two-stage architecture in the server and telecom application, CPES is also investigating the 400 V to 48/12 V converter for various applications, whether it is a regulated, semi-regulated, or unregulated bus converter. This new generation of converter is based on the LLC-type of resonant converter topology. CPES has successfully demonstrated a 1 kW LLC resonant converter operating at 1 MHz, with efficiency approaching 96% and power density of 116W/in3. These numbers are significantly better than the state-of-the-art industry practice.

Currently, the front-end of DPS is realized by a highly customized design with multiple outputs using the PWM converter technologies These topologies suffer significantly, with poor efficiency due to hold-up time requirements. The prototype demonstrated at CPES represents significant improvement in both efficiency and power density. This particular topology no longer suffers due to hold-up time requirements. Companies such as Intel, IBM, and HP are pushing the change of distributed power architecture to a much more simplified approach using basic building blocks like what is described above. It is anticipated that this approach will be adopted in the near future. 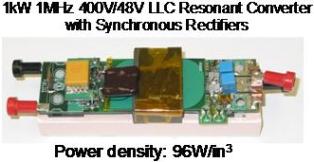 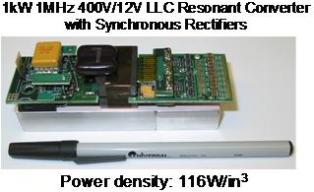