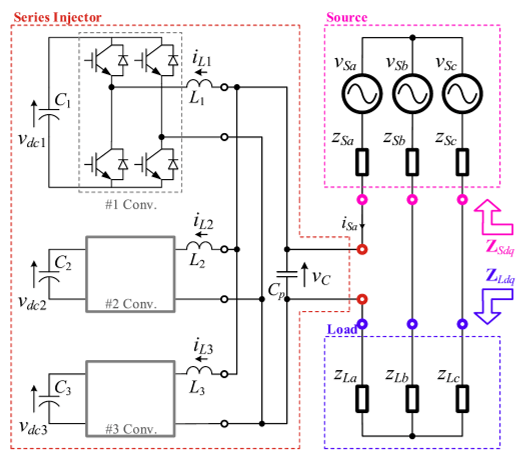 Fig. 1. Power stage of the impedance measurement setup for a three-phase ac power system using a transformerless series injector based on three PHB converters.
Small-signal stability of ac power systems can be assessed by measuring terminal impedances with a transformerless series injector for wideband measurement of source and load impedances. A typical implementation of the transformerless series injector is a paralleled H-bridge (PHB) converter, shown in Fig. 1, where dc voltage imbalance will occur when the system-current magnitude is larger than a critical threshold, and thus the operation region of the series injector is seriously restricted. To address this issue, this work presents a deep analysis of the mechanism behind dc voltage imbalance for a PHB-based series injector, and reveals that positive feedback exists in the dc voltage-balancing loop under high system-current magnitude. An enhanced control scheme is proposed to balance dc voltages in the full system-current range, where a reactive component is injected in the output voltage while a reactive circuiting current is introduced among H-bridge converters for redistributing active power. The imbalance mechanism of dc voltages in the existing control scheme is analyzed, revealing that positive feedback appears in the dc voltage balancing loop when the system-current magnitude exceeds a critical threshold determined by the power losses characteristic of H-bridge converters. Furthermore, an enhanced control scheme is proposed to make the PHB operate safely in the full system-current range by introducing reactive components in output voltage and a reactive circulating current among H-bridge converters for redistributing active power. The proposed scheme also proves that dc voltages of PHB can be balanced within the full system-current range with a properly designed reactive component magnitude of the output voltage. The imbalance mechanism of dc voltages in the existing scheme and the feasibility of the proposed scheme are demonstrated by both simulation and experimental results. The proposed control scheme extends the system-current capability of PHB and will be attractive in ac impedance measurement applications.
The system behavior with the proposed scheme is comprehensively analyzed in this paper, and the reference design for the injected reactive component magnitude in the output voltage is offered. Finally, the imbalance mechanism and the proposed scheme are validated by simulation and experimental results.