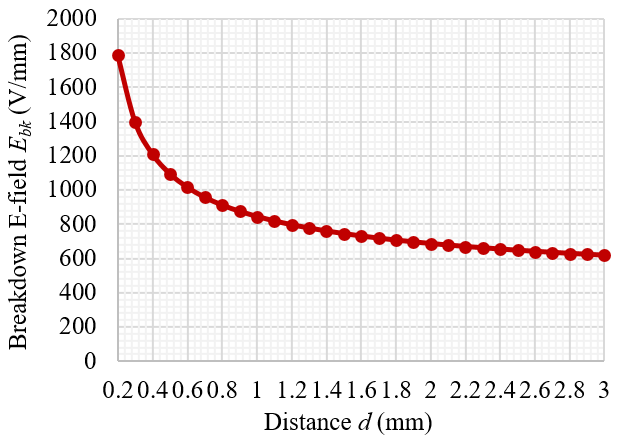 Fig. 1. Breakdown electric field Ebk versus distance.
Wide-bandgap (WBG) semiconductor devices, such as silicon carbide (SiC) MOSFETs, has emerged increasingly as a viable alternative to silicon (Si) IGBTs in airborne applications. The gate driver, as the adjacent electronic unit to SiC MOSFET modules and the essential interface between control system and power stage, is facing significant challenges. The move to higher voltages and the more compact packages of WBG semiconductor devices challenge the insulation design. In particular, low-pressure working condition of the aircrafts degrades gas dielectric strength, which leads to an increased risk of partial discharges. To avoid discharges, a safe clearance distance should be maintained, however, only one standard, IEC 60664-1, provides an altitude correction factor of 6.67 at 50,000 ft, which might lead to overdesign that reduces the system power density. Instead of adding oversized correction factor of standard, insulation coordination is defined utilizing Paschen curve. The breakdown E-field Ebk converted from Paschen curve is shown in Fig. 1, where d is the distance between two conductors. As seen, Ebk decreases and infinitely approaches 600 V/mm as d increases. A safety margin of 50 % is added to account for intensified fields. Therefore, the targeted peak E field Epk in the proposed gate driver is below 300 V/mm.
Printed circuit boards (PCBs), with advantages of low profile, low cost, and perfect fit for automated manufacturing and mass production, have been widely used as carriers of electronic components. As solid insulators, they have a much higher dielectric strength (> 40 kV/mm) compared to dry air (3.3 kV/mm). With this feature, electric-field (E-field) management is applied to the layout design. By properly designing the field control plates, the peak E field was shifted from the air to the PCB dielectric, effectively reducing the field strength along the surface of the PCB in air.
In this work, a gate driver for SiC-based GRUs for variable frequency airborne applications is designed. The hardware assembly is shown in Fig. 2. The size of the gate driver is 133 mm x 62 mm 23.8 mm. Rogowski switch current sensor (RSCS) is implemented in this gate driver to provide a fast and reliable fault detection mechanism that meets the narrow and inconsistent short-circuit withstand time requirement of the SiC MOSFETs.