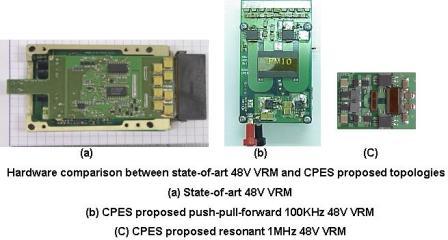 In high-end server systems, a 48V input VRM, called powerpod, was used. CPES has developed a 1.2V at 70A VRM module based on an innovative push-pull forward topology developed at CPES. This module offers improved transient response and 3~5% higher efficiency compared with conventional topologies. Further improvement is made with input filter integration. A novel multi-channel interleaving technique is proposed to further improve power density and transient response. To explore MHz switching 48V VRM, CPES continuously developed multi-resonant topology for this application. Several patents have been filed. These new topologies enable us to operate the VRM at a switching frequency in the low-megahertz range and in the same time with a 3% to 7% improvement in efficiency. The size/cost reduction of the passive components is evident.
Return to CPES Showcase