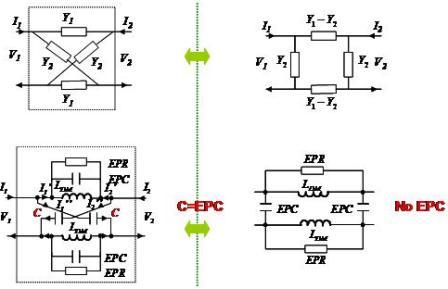 It is well known that the equivalent parallel capacitance (EPC) of DM inductors is detrimental to their high frequency (HF) performance. Minimizing EPC so as to greatly improve DM inductor's HF filtering performance is very important for noise suppression and current ripple reduction in power electronics applications. In order to reduce the effects of EPC, traditionally, the distance between the winding turns is increased; however, the performance improvement is still limited. An EPC cancellation technique is proposed in CPES based on network theory. The inductor's model is first studied and two kinds of winding capacitances are identified. One is the capacitance within one winding and the other is the capacitance between two windings. Their total effects can be equivalent to one positive or negative capacitance parallel with the original two windings respectively. Two capacitors are proposed to be diagonally connected (when total effect is a positive capacitance) or parallel (when total effect is a negative capacitance) to two windings to cancel the total effects of two kinds of winding capacitances. The resultant circuit is a - type filter without the effects EPC. The experimental results show the inductor's HF filtering performance is improved by 28dB at 30MHz. It is a reduction of EPC by 25 times!