CPES has been working on a behavioral EMI modeling techniques for almost a decade now. Over the years we have developed and improved such techniques and have tested it on several applications ranging from dc-dc converters to full-bride inverters. Our current efforts are being focused on behavioral modeling of a three-phase motor drive system for aerospace applications.

There are two general expectations from any EMI model. First, the model should be simple enough so that it can be simulated on most computers. Second, the model should very accurate in the interested range of frequencies. Unfortunately, with the present state of art in EMI modeling, these two goals cannot be met simultaneously at higher frequencies (> 10MHz). Simple EMI models are developed with only dominant parasitics. Hence they cannot replicate the high frequency behavior of a system. Detailed modeling on the other hand involves extraction of all possible parasitics in a system, making it an extremely cumbersome task. Also, there is no guarantee that once the model is made, the simulator will be able to converge on its time-domain solution. These issues become the bottle neck of product design especially when we move from circuit-level to system-level EMI design. This serves as motivation of the research.

CPES researchers solved the problem with behavioral modeling, involving a noise model with linear noise source and impedance, then fit the terminal behavior of the system at high frequency. The model was successfully tested on dc-fed half-bridge and three-phase inverter systems using measurements from outside the system on positive, negative, and ground terminals. The model runs in the frequency domain and simulations are very fast - usually lasting only several seconds. 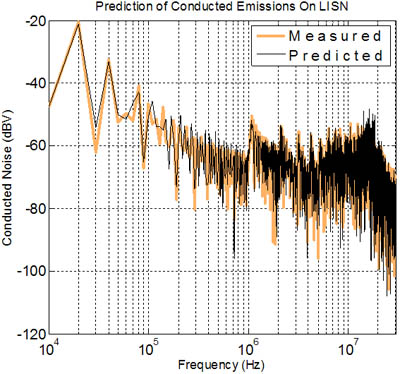