Fig. 1. Concept of smart panel: (a) Smart panel concept. (b) Input and output I-V curve of smart panel.
Residential PV systems always suffer from power loss that results in poor performance due to mismatches. Addressing and minimizing the power loss of PV systems under such conditions is critical to improving PV system efficiency in residential applications. A module composed of a PV panel with a dedicated MPPT DC-DC converter, which we call a smart panel, is proposed and illustrated in Fig. 1(a).

The PV panel-level converter decouples the PV panel from other panels, and Fig. 1(b) shows its output curve mapped to a wide MPPT range. Due to safety and device rating issues with the smart converter (SC), voltage limitations and current limitations are added for protection.

Studying a small shading case inside the PV panel, such as bird droppings or a fallen leaf, indicates that this small shading has a disproportionate impact on energy production. A smart converter for PV cell strings is proposed to tackle such problems. Compared with other topologies of smart converters, a series connection of buck subpanel smart converters has been adopted, as shown in the upper part of Fig. 3(a), and the subpanel MPPT structure is optimized, as shown in the lower part of Fig. 3(a), which makes the solution much easier without suffering significant power loss. The detail control diagram is shown in Fig. 3(b). 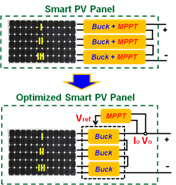 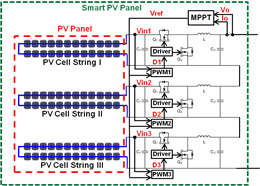