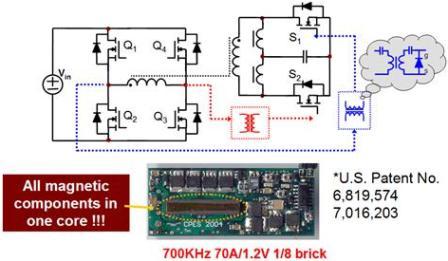 The new generation of telecommunication equipment, employing the open frame architecture, modular approach to signal- and data-processing has necessitated the use of distributed power systems (DPS) with a point-of-load (POL) converters customized to the load. The POL converter is used to isolate and convert the intermediate bus voltage, which is normally at 48V, to the precisely regulated core voltage needed by the microprocessor of other loads.

The key to the success in this particular area is to be able to pack as much current capability as possible for a given footprint and form factor. Achieving higher power density necessitates higher operating frequency, while at the same time, maintaining higher efficiency. CPES has developed several patented technologies that enable multiple magnetic components to be integrated together, that allow energy saving soft-switching and loss saving gate driver techniques to be realized to enhance the current handling capabilities while increasing the efficiency and power density of the converter.

The ZVS complementary-controlled self-driven full-bridge converter shown below is a converter example that utilizes two of the advanced power electronic concepts developed at CPES, which are a loss saving self-driven synchronous rectification circuit and an integrated magnetic design. The complementary-controlled full-bridge has similar properties to the phase-shift full-bridge in that the switching losses of the devices are significantly reduced, but the complementary switching action leads to using simplified self-driven synchronous rectification circuit. The CPES proposed self-driven circuit saves 50% of the gate drive losses compared to an external gate drive circuit. To further reduce the footprint of this converter an integrated magnetic design was developed at CPES to integrate the power transformer, two gate drive transformers and two output inductors into a single magnetic component. By combining all the aforementioned technologies together, an eighth brick DC/DC converter was developed that operates at a 700 kHz switching frequency and supplies a 70A/1.2V load, which is 40 percent higher than the state-of-the-art eighth brick converter.
Return to CPES Showcase