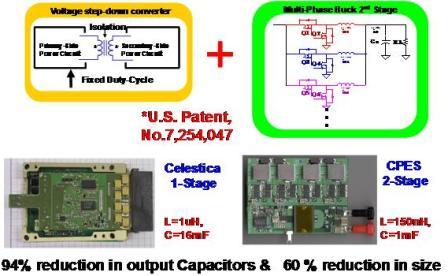 Intel was also directing us to investigate possible VRM solutions that can be used to power the Itanium processor. This processor is used to power high-end computer servers. Because this processor consumes considerably more power and current and takes a 48V input and the converter 1V output, how to get low cost, high density and high performance VRM, called Power Pod at that time, was s big challenge.

Following the 1997 CPES proposal for the multi-phase VRM approach, the infrastructure to support a multi-phase point-of-load converter has been established, gaining the full support and endorsement of the computer, integrated circuit, semiconductor, as well as power supply industries. By leveraging this superior technology, CPES has proposed to replace the highly custom-designed 48V isolated converter, Powerpod, with a novel two-stage approach, namely a "bus converter", serving as a "DC/DC transformer" used in the first stage to convert, say 48V, into an intermediate voltage, say 12V, while the multiphase buck converter is adopted as a non-isolated point-of-load voltage regulator that converts 12V input to 1.2V output, or any other form of voltage required. By leveraging the infrastructure established for the multi-phase voltage regulator for microprocessor applications, this proposed change has resulted in 15-25% cost savings for the next generation of telecom and networking products, with a market size even greater than that of the VRM.
Return to CPES Showcase