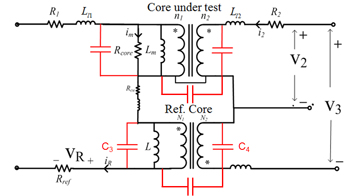 Fig. 1. Core loss measurement method for arbitrary wave-form excitation and its major parasitic capacitance.
An accurate core loss characterization of a magnetic material is important in the material selection and core loss calculation in the magnetic design for DC-DC converters. The two conventional material selection criteria are based on sinusoidal excitation measurement however, none of the excitation waveforms of a DC-DC converter are sinusoidal. Therefore, the core loss measurement methods for arbitrary excitation need to be developed. A method with good accuracy in principle was proposed recently by M. Mu, but its measurement waveform still suffers from the oscillation caused by the parasitic capacitance C1~C6 as shown in Fig. 1. To overcome this problem, a method is proposed to reduce the parasitic capacitance by reducing the thickness and turns number of the core under test. The effect of doing so is twofold: 1) The parasitic capacitance of the core under test is reduced because of a larger distance between windings and a shorter winding length. 2) The magnetizing inductance of the core under test is reduced, so the required cancella-tion inductance (which is the magnetizing inductance of the reference core) is reduced accordingly. This also reduces the required turns number on the reference core, which in turn reduces the parasitic capacitance on the reference core too. As a result, a clean waveform with almost no oscillation can be achieved as shown in Fig. 2. Using the proposed method, the core loss density of 3F35 at 500kHz 100°C is measured, and the waveform oscillation impact on the measurement results is shown in Fig. 3. It can be seen that the error caused by the oscillation can be positive or negative; and the oscillation impact is more severe at a smaller flux density and non-symmetrical duty cycle (other than 50% duty cycle). 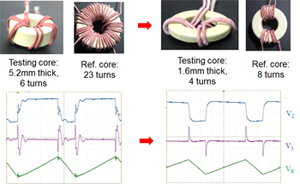 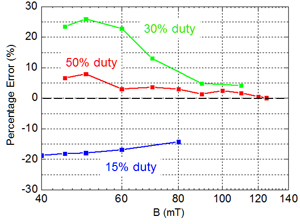