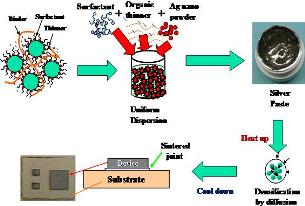 Fig. 1. A flow chart illustrating the making and using of CPES's nanoscale silver paste for joining power chips to substrate.
Today, power semiconductor devices in advanced single-chip packages or multi-chip power modules are fastened to substrates using either lead or lead-free solder alloys. These connections serve as electrical interconnections and heat dissipation paths. In the case of power modules, an additional large-area solder layer is often used to attach the substrate to a heavy heat-spreading plate. Solder is commonly used for chip-attachment because of its low processing temperature; most solder-reflow processes can be done below 300°C. However, solders have low electrical and thermal conductivity. In addition, die-attached solder layers are susceptible to fatigue failure under cyclic loading due to low yield strength and accumulation of high inelastic strains during deformation. Because the soldering process involves the melting and solidification of solder particles in a flux mixture, voids often form due to entrapped gas evolving from the flux components and poor wetting of the surface by the solder. The growth of voids during thermal cycling is detrimental to the reliability and thermal performance of die-attached layers.

We followed a strategy of using nanoparticles of silver to lower its sintering temperature with low or no pressure. From the science of sintering, driving force for densification of a particle compact increases with decreasing particle size, thus the densification rate - a product of thermodynamic driving force and kinetics - could still be high at low temperatures even with low atomic diffusion rate. We formulated a uniform silver paste containing 30-nm silver particles. Uniform "green" microstructure of the paste is evident from images taken in a scanning electron microscope. The paste viscosity can be adjusted for screen/stencil printing or dispensing.

The top figure shows the flow chart for making and applying the nanosilver paste. Examples of some sintered power chips on various substrates are shown in the bottom figure. Table below lists key features of the nanosilver paste versus some existing attachment materials. The sintered attachment clearly has excellent electrical, thermal, mechanical, and thermo-mechanical properties and offers a simpler, lead-free solution for chip interconnection than the European technology. 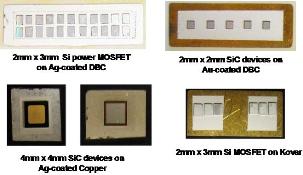 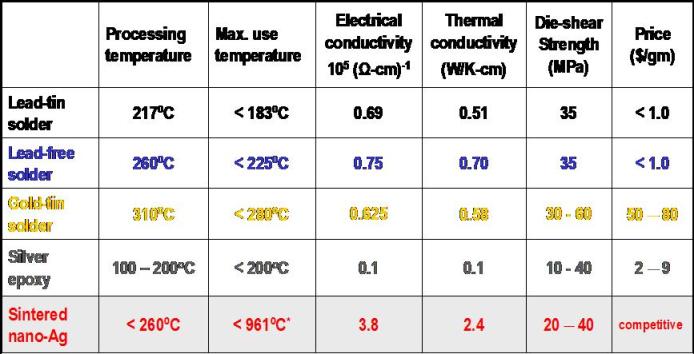